How Strong Is Steve From Minecraft: Game Theory

By Admin
205
Share
As a Minecraft player, I always stay curious to know about all the features and actions that take place in the game.
It’s just an open world game but there is something that I think makes it a lot different from the other games. 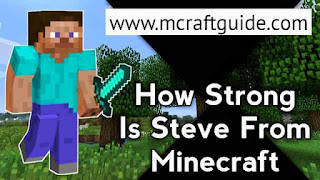 One such question is “How Strong Is Steve From Minecraft”. Well, it’s really an interesting question because you probably have observed that how powerful Steve is — he can break trees with hand, he can mine, and even carry more than anyone else.
Minecraft’s Steve is amazingly powerful. He can lift up to 9,871,769,900 kilograms or 2.176 × 10^10 pounds which is nearly equal to the weight of 65,000 blue whales. He can even run at a speed of 5.612 m/s and jump 7.143 m/s carrying the aforementioned weight.
If you are really interested about this topic and want to know more about Steve from Minecraft, then follow me till the end and I will answer every single question of yours.
Tip: I’m also going to discuss whether can Minecraft’s Steve can beat goku at the end.

How Much Can Minecraft Steve Carry?

As you already know, Steve can carry about 9,871,769,900 kilograms but how can he do this?
The heaviest item in the game is the notch apple which is crafted by using 8 Gold Blocks and 1 Apple in the crafting table [Earlier Versions].
There are a lot of different blocks that can be used but if we want the best possibility then we need to use this particular item because it’s the heaviest.
You can even use:
But for this example, I’m going to use a notch apple.
Basically, a notch apple is made up of gold blocks which is Minecraft’s heaviest block and has a weight of 19,300 kg.
So, by adding the weight of 8 gold blocks and an apple, we can get the weight of the notch apple which is equal to:
19,300 × 8 = 154,400 kg, including a negligible amount of apple weight.
It means a notch apple has a weight of 154,400 kg.
Now, if you have played Minecraft a little more than new players then you probably know about the Shulker box.
A Shulker box is special type of chest in Minecraft that has a specialty that doesn’t let things drop even if it is broken by a pickaxe.
As you can stack the notch apples up to 64 and a Shulker Box has 27 cells, it means you can store 27 stacks of notch apple in a Shulker box. 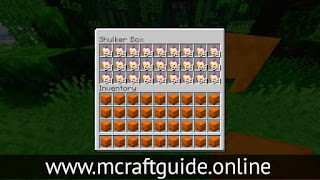 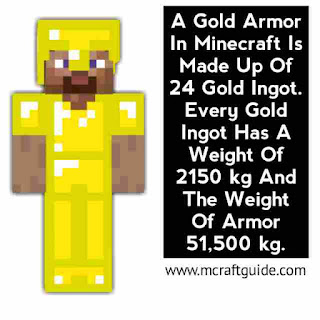 So far, the heaviest armor in Minecraft is the Gold Armor which has a weight of 51,500 kilograms or 113,500 pounds.
2,150 × 24 = 51,500 kilograms or 113,500 pounds
Now, if you want to know how much Steve can carry then you just need to do this last equation.
9,871,718,400 + 113,500 = 9,871,769,900 kilograms or 2.176 × 10^10 pounds
And it’s done! But I would like to tell you something which is a completely different theory.
According to a lot of people, they believe that Steve has no such super strength.
When Steve breaks a block to collect it then it starts floating in the air which shows that the matter has nearly no weight at all.
This also be understood by a different example.
According to Minecraft logic, a matter (sand, clay, iron) after being broken has no weight that it had before.  Even if you throw the blocks in the water, it will not drown and instead it will float which means it has nearly no weight.
If you want to go with this theory you can, or you can stick with that first theory.
But no one can really underestimate Steve because a man is judged not on the basis of how much he can lift, there are a lot of other factors too.
Minecraft’s Steve can run at the speed of 5.612 m/s normally and while jumping & sprinting it can reach 7.143 m/s.
Steve is really strong and if you are playing in creative mode with all the cheats, he can be referred to as the strongest game character.

One day when I was thinking about the question, “How Strong Is Minecraft’s Steve”, suddenly a thought came in my mind: can Steve beat Goku?
I started searching and then after researching a lot I finally got the answer.
But the only problem is that the there are two theories in front of us. One says that Steve has super strength and the other one says he doesn’t.
So, on the basis of the second theory which seems plausible to me, if a fight were to break out between goku and Minecraft’s Steve then for sure Goku will win.
I’m able to say this because Steve can even die by the attack of the Spider and that’s why you can’t even think of beating Goku.
Even with all the items in the world — TNT, weapons, armor, Steve will lose.
But if Steve is in Creative Mode with all the powers and cheats, Steve will win for sure — this case can also be true with the first theory of Steve’s Strength.
What do you think?
In conclusion, let’s do a quick summary.
In this article I have discussed two theories that explain how strong Steve of Minecraft is. I have also discussed the durability, strength, and speed of Steve, and at last, I delved into a breakdown between Steve and Goku.
Hope you liked the article, and be sure to comment your questions and thoughts below.
205
Share