How To Make Obsidian In Minecraft [Quick & Easy]

By Admin
65
Share
Do you know which is the most strongest block in minecraft.
You guessed it, it’s obsidian. 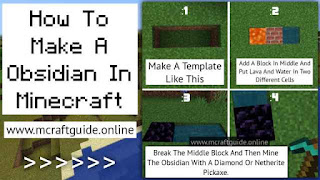 Obsidian is the most strongest block in minecraft that can be collect by a pickaxe.
It’s awesome because of it’s hardness, durability and variety of things that can be crafted by using it.
If you have ever made a nether portal or trying to make one then you can’t ignore obsidian in that case also.
But do you how you can craft the obsidian?
If you don’t know, it’s ok because in today’s article I’m going to cover the same thing. And by the end of the article, you will be able to make a lot of obsidian.
Let’s start!

How To Make Obsidian In Minecraft

The first step is to collect the items required to make obsidian.
Things that you need are:
Lava bucket is always required to make obsidian but firstly you have to collect it and then you need water bucket.
These both things are mendantory to make obsidian and without them you can not make it.
Let’s see, how you can collect all of these items.
Lava Bucket:
Lava is a uncommon resource in Minecraft and it only be found at some unique places.
There are a lot of places where you can find the lava.
Some of them are:
Surface Lava: Sometimes the lava is on the surface of the over world and for that you just need to travel a few blocks from your spawn point. 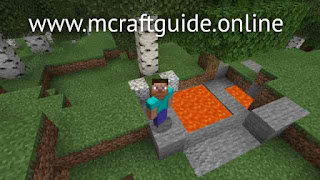 Or you can move to the next method.
Nether Ruins: After the new 1.16 update, there is a new structure added in minecraft called nether ruins.
It is basically a loot places where you can find a lot of cool stuff – gold, gold tools and armor, crying obsidian and lava.
It means if you become able to find a ruins in your minecraft world then you will easily be able to find some lava for you.
Or you can move to the next method.
Ravines:
Ravines are mainly open surfaces caves which has a lot of resources and mostly lava. It is found on the surface of the overworld.
I have a list of bedrock edition seeds which has some ravines seeds also which you can use to create a new world and find some lava.
Or you can move to the next method.
Caves:
A lot of times, I have got lava inside a cave or when I make a cave by myself up to level 11. And if I can get lava there then probably you can also get lava there.
After getting the lava, you have to collect it and for that you need a bucket.
A bucket can be crafted just by using three iron ingots and placing them in the exact pattern as shown in the image below in the crafting table.

If you have both lava and bucket then you just have to collect the lava in the bucket.
By using these method, you can easily get the bucket filled with lava.
Now if you have lava bucket, it’s time to get the water bucket which is the last thing that you need to make the obsidian.
Water Bucket:
To get the water bucket, you have to find water. You can find water easily in the oceans, seas, and in the ponds.
To collect water from its source, you have to collect it in the bucket.
To make the bucket:

To collect the water in bucket use these following methods:

After getting the required items, you can start making the obsidian.
Steps to make obsidian are as follows:

Making of obsidian is not enough, you need to collect it and for that you have to mine it using a diamond or netherite pickaxe.
If you mine it with a different pickaxe then you will never be able to collect it.
So, it is required to mine it with atleast a diamond pickaxe.
If you are struggling with finding diamonds then I would recommend you to read this article of mine: An Ultimate Guide To Find A Lot Of Diamonds
Steps To Mine Obsidian: 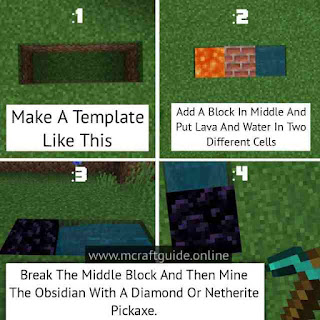 And with this last segment, the article is complete. For more information about Obsidian, and to see how it stacks up against Wither, read more here!
Let’s do a quick summary of the article.
In this article you learned that how you can make obsidian in minecraft by using lava bucket and water bucket and then how you can mine obsidian in minecraft.
Hope you liked today’s article, if you have any queries let me know in the comments.
65
Share